Well, boys and girls, it’s been an interesting couple of weeks for us all. And I’m going to hopscotch around the news cycle to offer some shallow sarcasm about it all.

Firstly, what the hell is the deal with top-secret documents, and I’m looking at you, President Biden. Do we take them from the office like some young news guy taking coffee filters and toilet paper from the station because he’s broke? Uh, that was purely hypothetical, by the way.

Whatever high ground the President had vis-a-vis Putin’s spokesmodel down in Mar-a-Lago has been lost because he was apparently stashing files from his senatorial and Vice-Presidential days and using them as garage insulation for his ‘67 Stingray. Now, granted, a pristine C-2 ‘Vette is worth more at auction than a B-2 bomber, but still, come on, Joe. All the holier than thou babbling about the Trump documents case and you had some next to the lawnmower and dried-out cans of paint?

In all seriousness, even though there are distinct differences in intent and response to the feds, your political enemies will make those distinctions disappear and with that, any chance of prosecuting Trump for lying about them, and resisting any attempt to get them back by the FBI.

And now, they found more at the home of former Vice-President Mike Pence. Gee whiz, guys, does everyone have top-secret files dealt to them like a poker hand? And, it seems, they either never looked at them or forgot they were there. The public library does a better job of keeping track of what’s been checked out. A few months ago, I predicted a Newsom/DeSantis race in 2004. That is now even more likely.

Then, there was the Cowboys loss to the San Francisco 49ers on Sunday. Now, I am a Houston guy, and we have no room to criticize since my Texans played like a Catholic girl's school field hockey team this year. But even with that embarrassment, I hate the Cowboys, and was not sad at the loss. And it is obvious that the talented quarterback, Dak Prescott, had a really off night. This is not to mention the place kicker, Brett Maher. Maher has been in a slump during the post-season, and anyone who has played sports at any level knows that can happen and no one is more frustrated than the player himself.

But the Governor, for crying out loud! Yes, the only governor we have, Greg Abbott, decided after the game before this one to weigh in on Twitter on the young kicker's performance.

Kick as good? First of all, the grammar. Did Abbott farm out the writing to Herschel Walker? And second of all, what in the name of all that is Texas is the governor doing jamming on a player for a Texas team? It's about as low rent a move as I can imagine and frankly, I'd rather have Governor Ironside kicking than governing.

And then there's the management of the Cowboys. Does Jerry Jones really, and how many unexpected questions begin with, "Does Jerry Jones really...?" But in this case, does Jerry Jones really know what's going on, and going out to the public from his organization? Now, Dak Prescott had a bad night, but unlike our former Texan signal-caller, he didn't take it out on some poor masseuse. In fact, he owned up to it and took full responsibility for the loss.

Now, I know the stats were way worse than when George Santos beat Joe Namath in Super Bowl III, and you expect that from cretins like Skip Bayless, but your own team? If I were Prescott, I'd be talking to my agent and squeeze these clowns for all the market will bear. It's as if the Astros after the loss in Game 1 of the World Series tweeted, "Damn, Verlander stunk up the joint tonight." You don't do that to your ace or your quarterback, and Prescott deserves an apology. Come on Jerry, because we know the governor won't give Brett Maher one.

And while on the subject of George Santos and his Super Bowl performance, all I can say is, "How 'bout that Baruch volleyball team?" The freshman congressman from New York has woven a, well, really crappy web of lies about himself and his accomplishments. It's a web that took steely-eyed investigative reporters all of about 5 minutes on Google to unravel. George never learned the prime directive when it comes to fudging your resume. Don't swing for the fences.

If you want to fake a degree, keep it modest. Don't claim that Steven Hawking raved about your PhD thesis in astrophysics.  If you want a phony military record, claim you were an MP in DaNang, not Westmorland's second-in-command. But poor George doesn't seem to have that sense of proportion, or seemingly, the common sense the good lord gave small dinner salads. Mediaite assembled a sampling of his encounters with the truth...

18. Using a fake Churchill quote to defend himself

17. Hiding the fact he was previously married to a woman

16. Claiming he attended the Met Gala

15. Denying he performed as a drag queen

14. Claiming to be a college volleyball star

13. Allegedly stealing a Burberry scarf, etc. from his roommates

12. Lying about his entire educational experience

11. Lying about his work experience and personal finances

10. Claiming to have rescued thousands of pets

7. Where did all that money come from?

6. Pretending to be Jewish

5. Claiming he meant he was “Jew-ish”

4. Claiming four of his employees were killed in the Pulse shooting

3. Pretending to be descended from Holocaust survivors

2. Pretending his mother was in the World Trade Center on 9/11 and that she died as a result of the attacks, when actually she was living in Brazil

1. Allegedly stealing money meant to save a disabled veteran’s dog

So The Talented Mr. Santos, sits in Congress, and has been given a seat on two committees, the Committee on Small Business and the Committee on Science, Space, and Technology. Perfect assignments for a former VP at Goldman Sachs and the 13th man to walk on the moon, and of course,  Stephen Hawking's favorite student.

It's official. The world's oldest floating crap game is back in session. Yes, hide your daughters and the silver, the Texas Legislature has convened another biennial pander-fest and Lib-roast. Before they actually attempt any legislating, expect lots of bills prohibiting things that don't exist like Critical Race Theory in primary schools and drag queens teaching geometry, or something. We'll see more blather about vouchers and "school choice" which is a way to cut funding for public education and get the state to pay for private schools. It will come up again because big Republican donors like it.

We will also be treated to more chest-thumping about the border and "Operation Lonestar," the amazingly costly and ineffective campaign ad for the governor. And more of the precious and rare budget surplus will swirl down the porcelain for that ill-conceived military operation that makes the Maginot Line seem inspired.

And finally, my hometown of Houston has been bombarded, again, with a batch of city rankings as long as a Justice Department deposition, and if you take them at face value, it adds up to one thing. To paraphrase a Union general, "The devil must own hell and Houston and decided to rent out Houston to us."

TRAFFIC: "Honey, I'm stuck on the West Loop but I should be home by Bobby's freshman year."

Yes, we have traffic congestion and it has now been quantified by the kind of folks who have nothing better to do. Houston commuters spend 75 hours a year, 3 days out of your life (5th longest in the US), sitting in your personal transportation module, creeping along while you listen to the 2,376th playing of "Satisfaction." Or worse, Dan Patrick's radio station. We have a grand total of 3 commuter rail lines in the 4th largest city in the country, and if our local leaders have their druthers, we will try to pour our way out of it, as in concrete. After, all it's worked so well so far, and besides, mass transit is vaguely socialist.

The good folks at Old Spice, which started out in the 30's as a women's fragrance, thus confirming our worst suspicions about sailors, have a Forrest Gump level mastery of the obvious. They have published their list of the sweatiest cities in America, and Big H ranks third behind DFW and New Orleans, a pair of hellholes for other reasons as well. Our crime is apparently one of latitude, which makes this list worthy of a collective, "what?" Let me get this straight, head south, hotter; head north, colder. Got it, guys. I thought it was just me.

FAT: Would a massive switch to light beer help?

Yeah, Men's Fitness Magazine laid into us again for our city's apparent lack of tone and definition. It has happened before, by the way. Back when Lee Brown was Mayor, the same thing happened, and his inexplicable response was to appoint a "fitness czar." Without commenting on this trend of naming management positions after despotic, Russian aristocracy, you have to wonder about a bug-eyed, steroid-soaked bodybuilder as the new paragon of body image. With the leadership skills he showed when truly trivial issues arose, Brown appointed a former Mr. Universe named Lee Labrada to the honorary post. With Labrada at the helm, no doubt aided by a couple of former Astros and Rockets, the city braced itself for a professional wrestling-style training and pharmacological regimen that left the Bayou City bulked up, angry and impotent. I didn't check at the time, but that probably landed the town on some other magazine's top ten list.

So, as we close in on wrapping up the first month of 2023, with Dan Patrick and Marjorie Taylor Greene taking charge, we can all sleep sounder knowing the republic is, uh, well, OK, headed for a ditch. But it will give us lots to write about, so look on the bright side.

Subscribe - Don't Miss a single story from Roger!
⭐
Roger Gray has toiled at the journalism trade since 1970 and his first radio news job at KTRH in Houston. Over those woefully misspent years, he has worked in radio, TV and written for magazines. He was twice elected President of the Texas Automobile Writers Association and was elected to the Texas Radio Hall of Fame. He covered the first Persian Gulf War, the fall of the Berlin Wall, the reunification of Germany, Oslo Accords in Israel and peace talks in Ireland. He interviewed writers, actors, politicians and every President from Ford to George W, and none of them remember him.
Now, he is part of the Texas Outlaw Writers, and if this doesn't pan out, the outlaw part will still work as he will indeed resort to robbing banks.

Thank you, gentle readers, for getting us to our First Anniversary! Thanks to you, we've made it this far! Seriously, thank you for supporting us through your readership, your subscriptions, your tips, and your feedback. We continue to try to get our newsletter out midweek, with at least 3 or 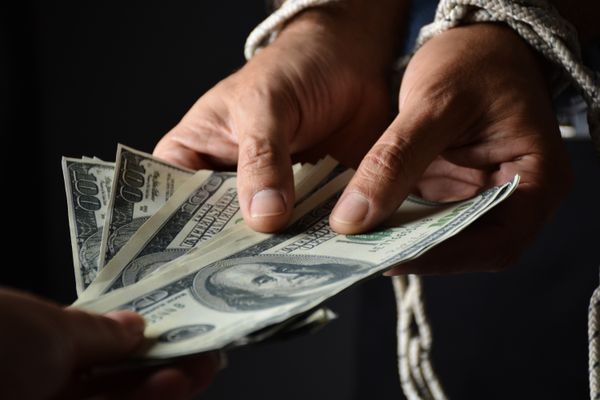 Taking no action on the debt ceiling would trigger what experts call catastrophic economic consequences for Americans and the global economy. But that hasn’t stopped extreme members of the Republican party in Congress from using the debt ceiling to get their way in spending cuts.